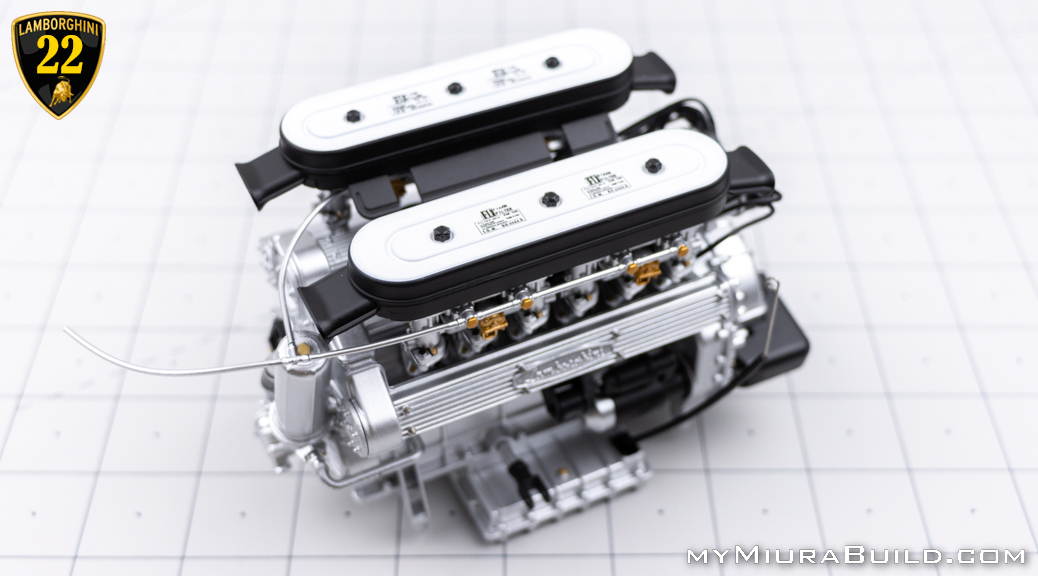 “You’ll install various parts that feed the oil and petrol needed by the engine to operate, as well as the water pump which keeps it  from overheating and the starter motor that ignites it.”

In the US, we spell these parts as carburetor. However, for clarity in these stages, I will use the provided part names. 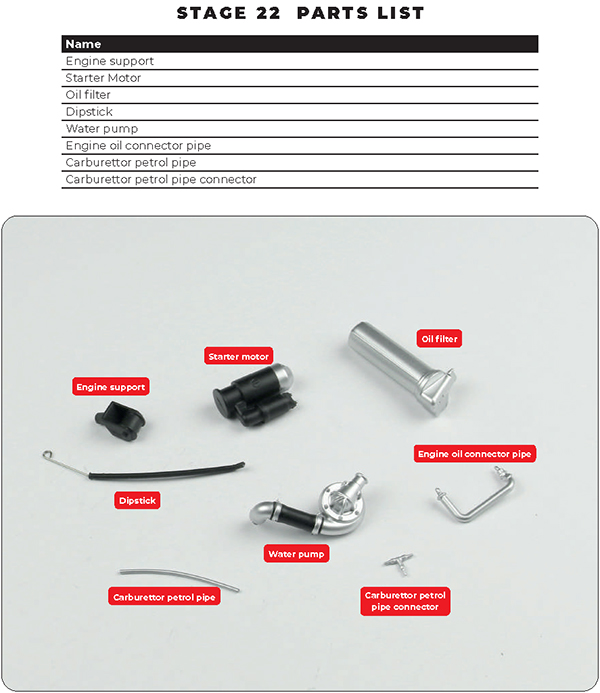 Materials: The silver part of the Dipstick is metal, the Carburettor Petrol Pipe is PVC, and the rest of these parts are plastic.

Retrieve your Engine assembly from the previous stage. Firmly press the two pins of the Water Pump into the matching holes at this location on the front of the Engine Base, as shown: 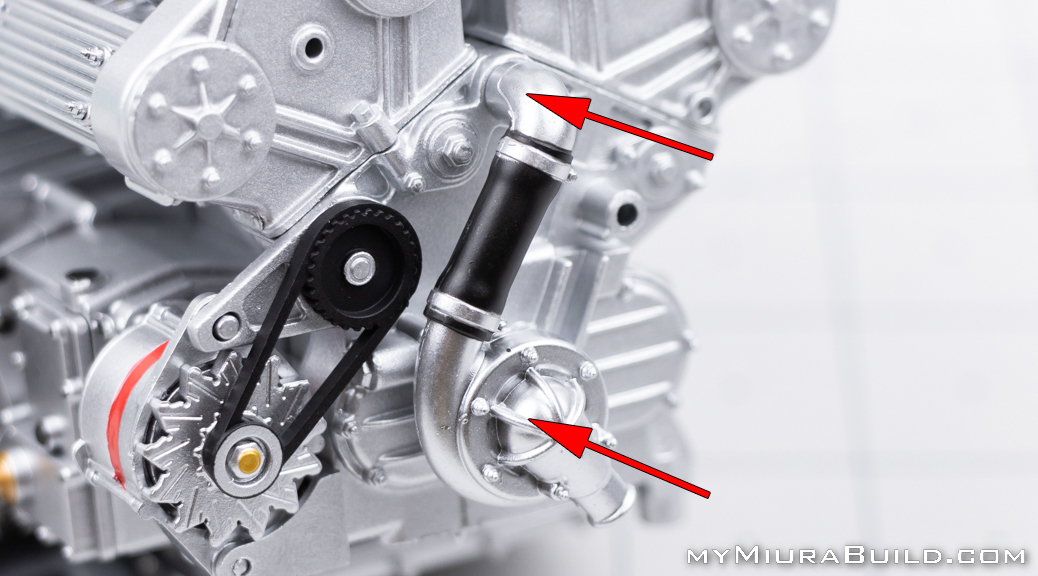 Firmly press the keyed hole of the Oil Filter onto the matching keyed post of the Engine Base, as shown: 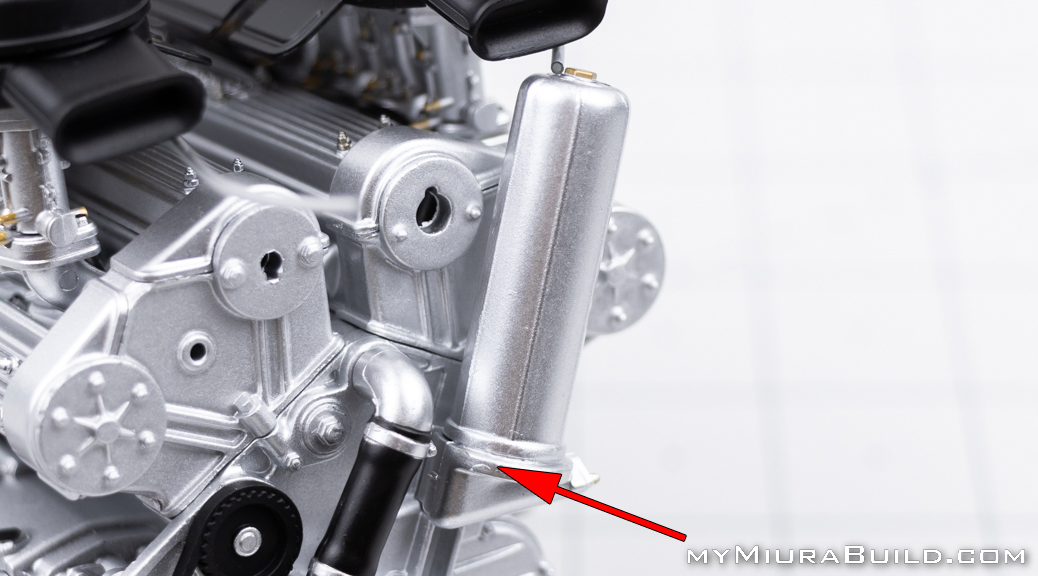 Just to add a bit of color, I ‘painted’ the nut on the end of this Oil Filter with my Metallic Gold Sharpie: 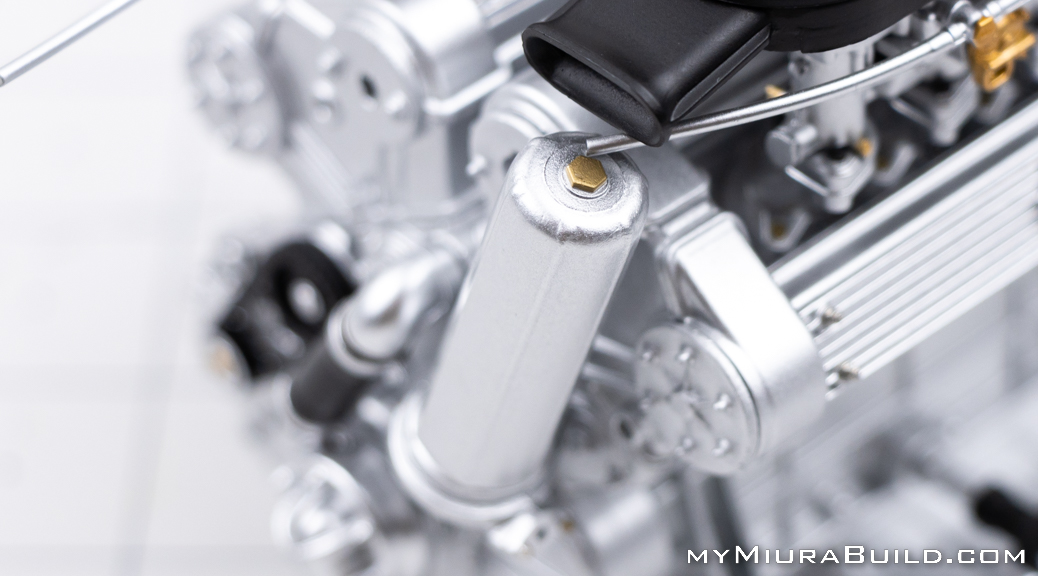 On my model, the Engine Support was a very loose fit, so I used a drop of super glue to hold it in place: 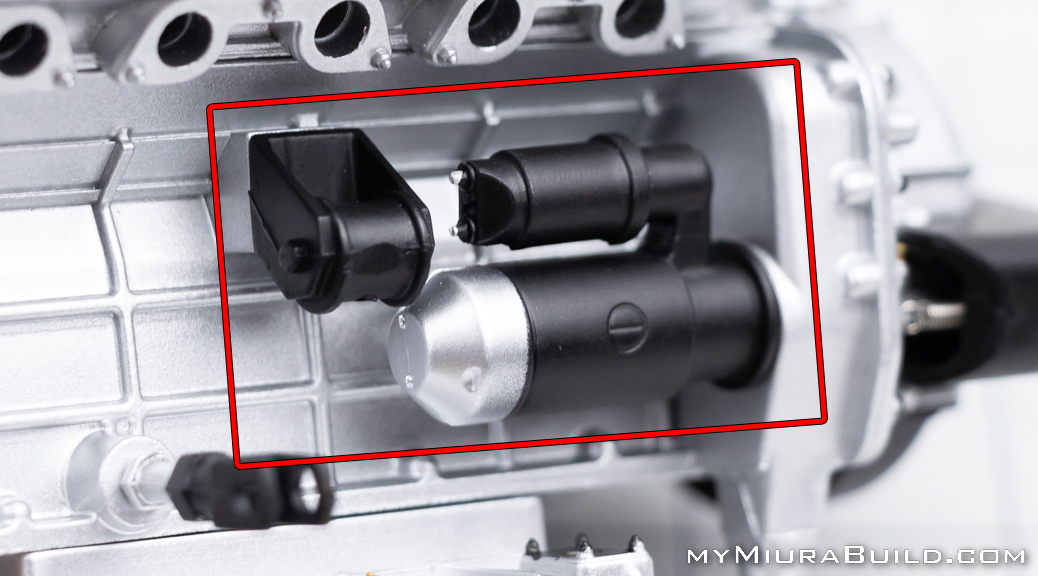 Press the two pin ends of the Engine Oil Connector Pipe into the matching holes at the bottom of the Oil Filter and the Engine Base.

The shorter end of the Engine Oil Connector Pipe fits into the bottom of the Oil Filter, as shown: 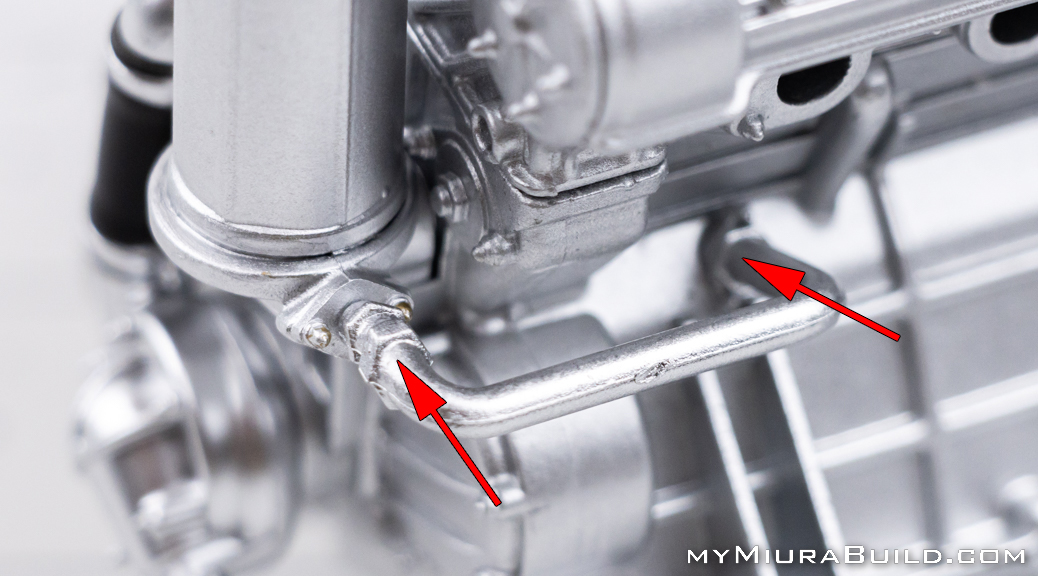 Press the pin on the black end of the Dipstick into the matching hole on top of the Oil Sump, as shown.

On my model, this was not a super tight fit, but it does allow the Dipstick to be rotated as needed. Until I know where the Engine will sit in the Chassis, I will leave mine loose. I can always glue it into place later on: 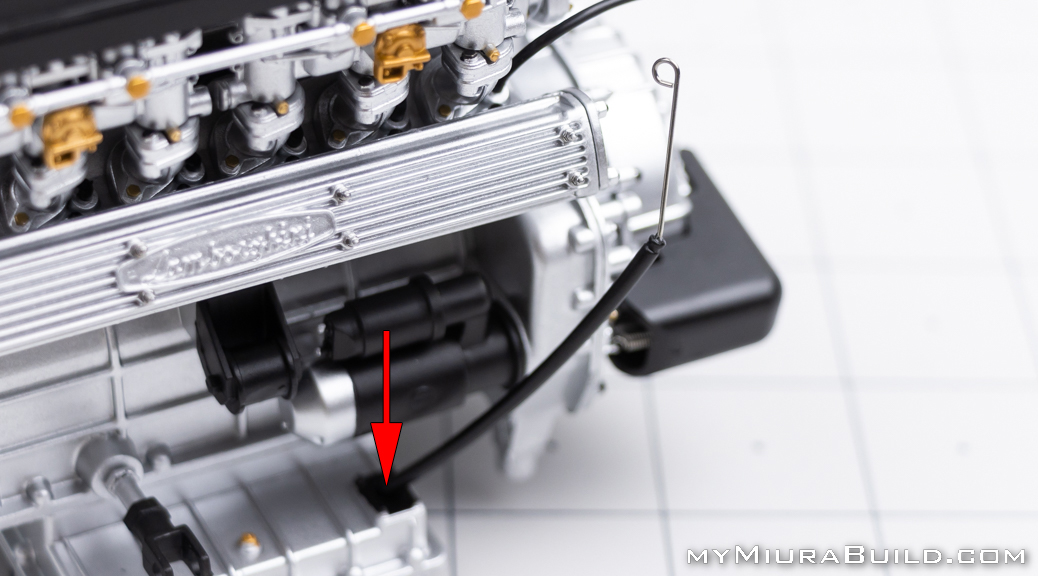 If you find these pipes are a tight fit, try using the tips of your tweezers to gently widen the ends of the hoses first: 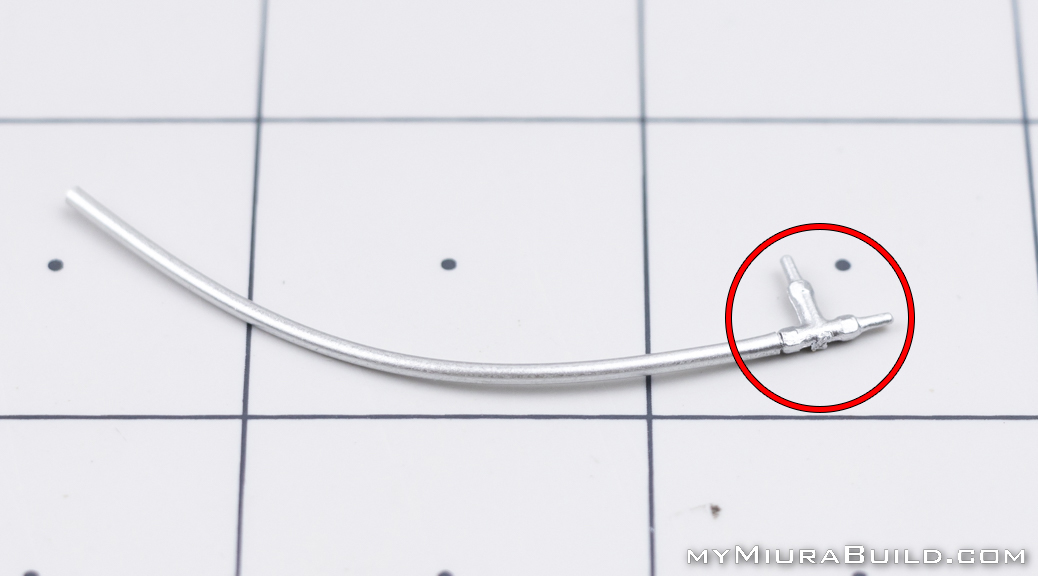 Slide the free end of the longer Petrol Pipe we installed back in Stage 16 onto this pin of the Carburettor Petrol Pipe Connector, as shown: 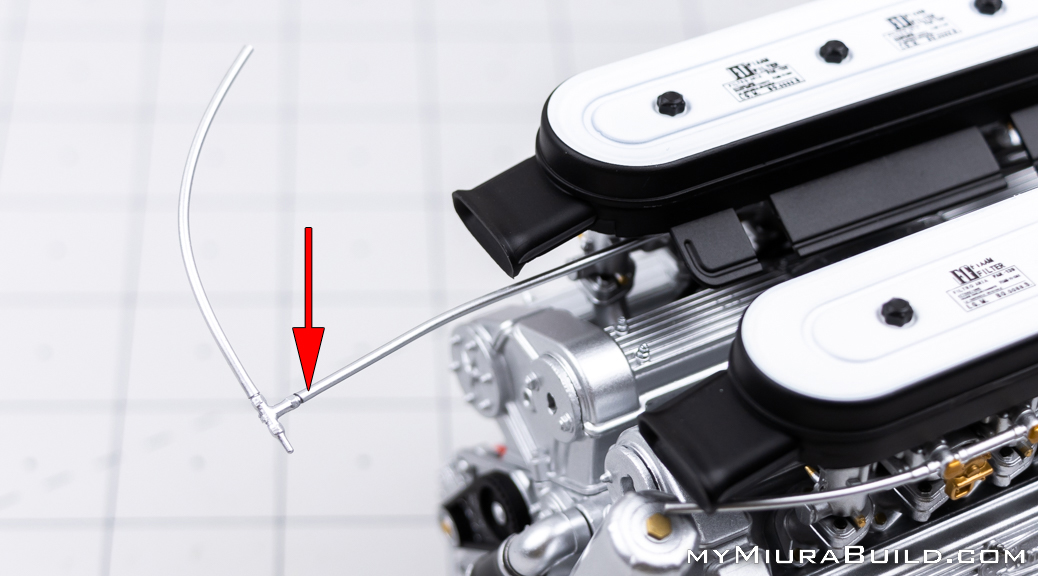 Slide the free end of the shorter Petrol Pipe we installed back in Stage 16 onto this pin of the Carburettor Petrol Pipe Connector, as shown.

To improve the look of these pipes, they will be trimmed shorter once I know where the fuel filter is going to be located in relation to the engine: 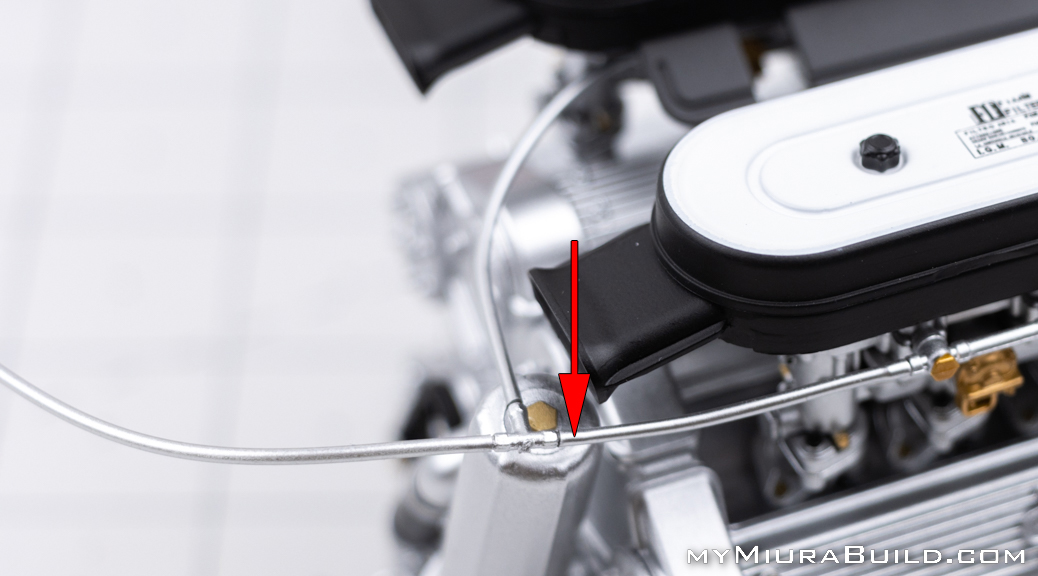 So many small details in this stage. But, these details are what is making this Lamborghini Miura partwork build so special!