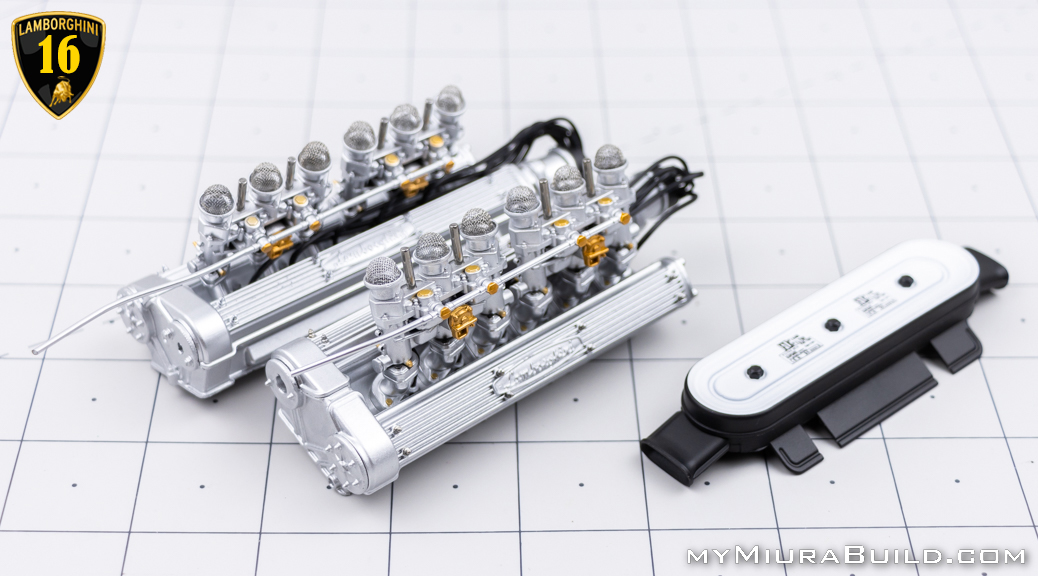 “In this stage you’ll assemble the left air filter box, then it’s time to fit the carburettors from the last pack with petrol pipes.”

In the US, we spell carberettor as carburetor. However, for clarity in these stages, I will use the provided part names. 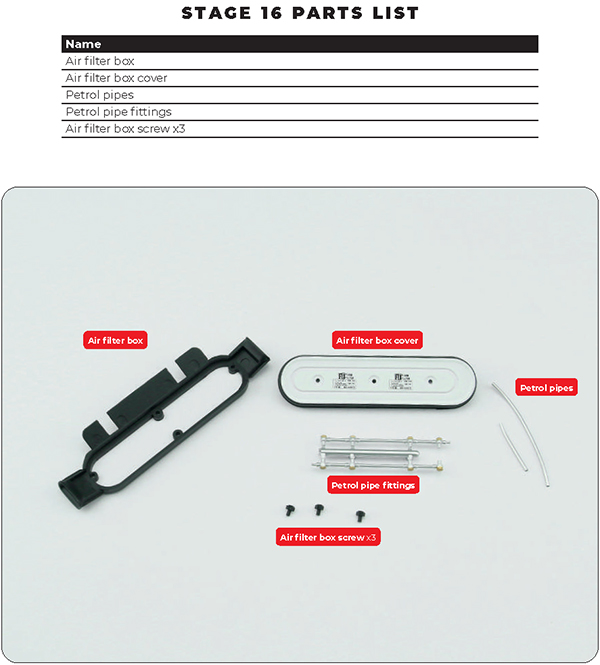 Materials: Other than the two PVC Petrol Pipes, everything in this stage is plastic. 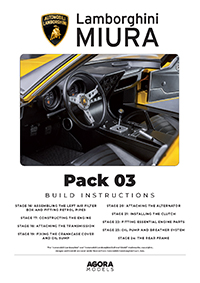 Carefully press the pin of each Air Filter Box Screw into the matching holes on top of the Air Filter Box Cover until flush. It is recommended to do this by hand to protect the paint: 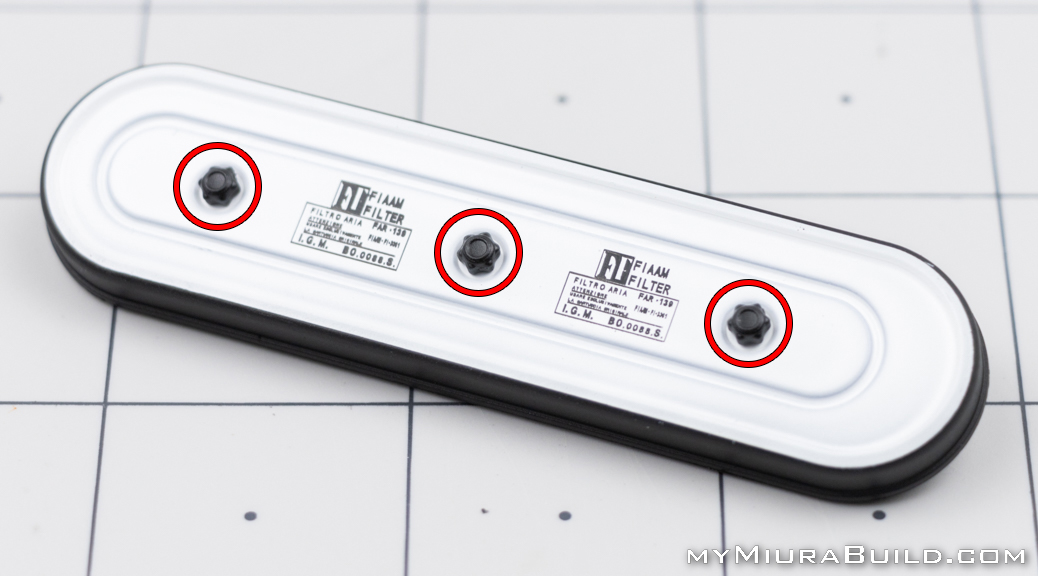 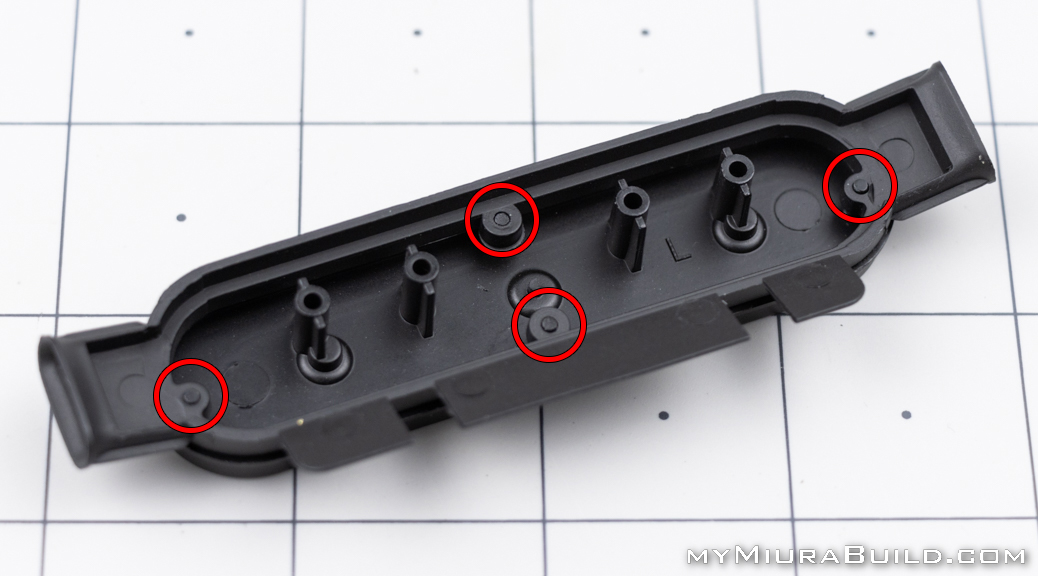 This completes the assembly of our left Air Filter Box. Set this aside until needed later on in the build: 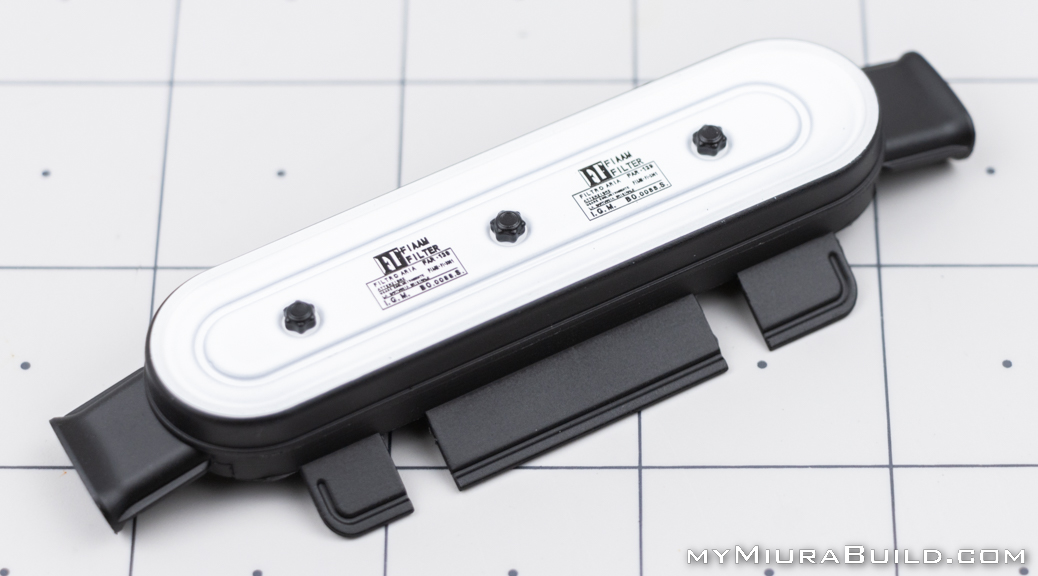 Cut the two Petrol Pipe Fittings from their sprue.

I recommend using sprue cutters or a sharp hobby knife when removing plastic parts from sprues. Here, I have removed one of the two parts to show where the cuts should be made: 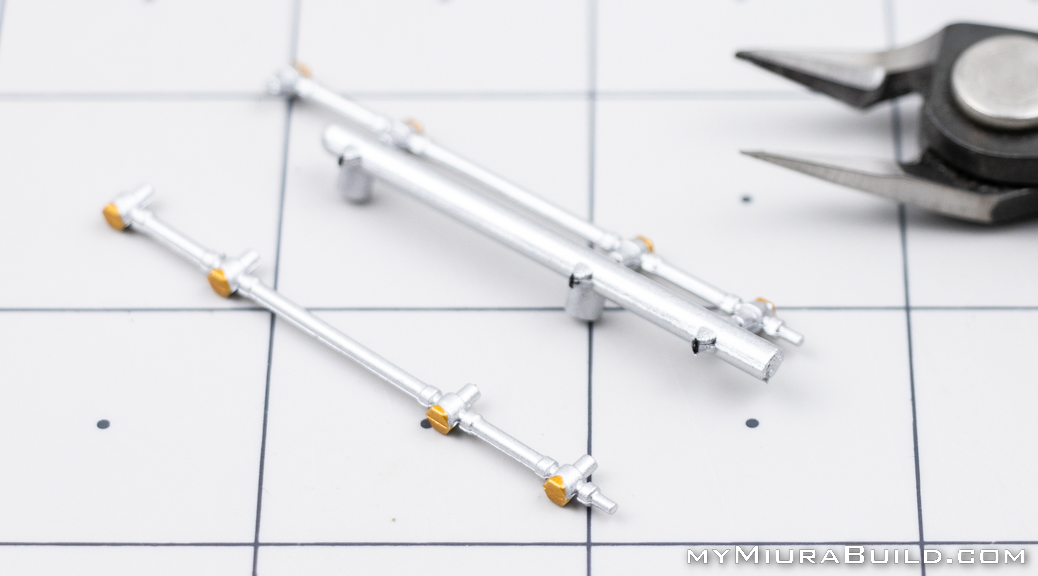 Retrieve your Cylinder Head (Right) assembly from the previous stage.  Press the four pins of the Petrol Pipe Fitting into the matching holes of both Right Carburettors making sure the Petrol Pipe pin (arrow below) is facing the end opposite the Distributor, as shown.

You may find it easier to get the pins started in each Carburettor hole, then pressing then entire Petrol Pipe Fitting flush into place: 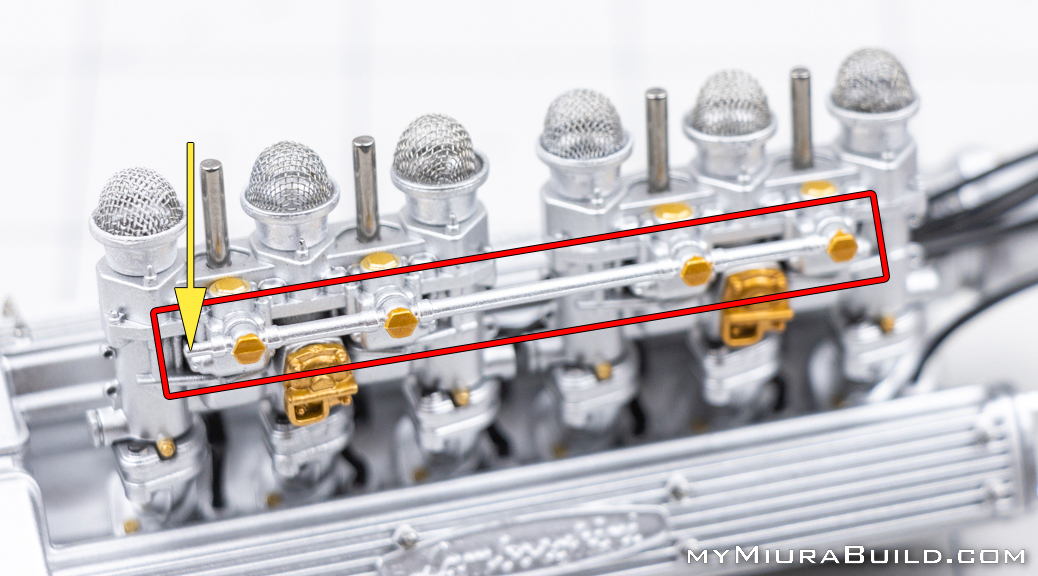 Carefully slide the shorter Petrol Pipe onto the pin at the end of this Petrol Pipe Fitting, as shown. Using tweezers and twisting the pipe as you install it may make it easier to install.

If you find these pipes are a tight fit, try using the tips of your tweezers to gently widen the end of the hoses first: 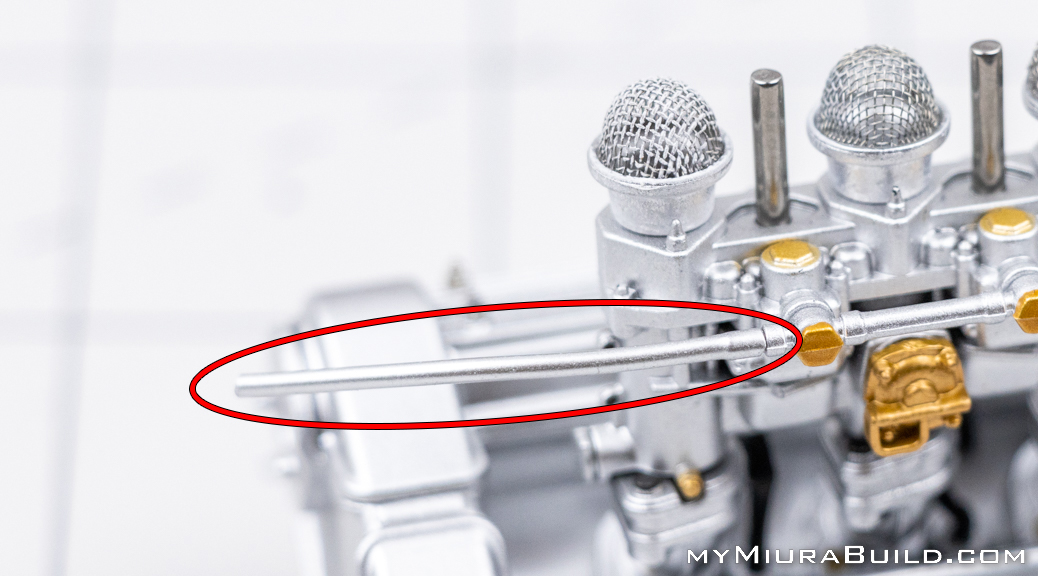 Retrieve your Cylinder Head (Left) assembly from the previous stage and both Left Carburettors from Stage 11 and Stage 12. Similar to the last stage, press the pins of the Inlet Manifolds into the matching holes of the Cylinder Head. 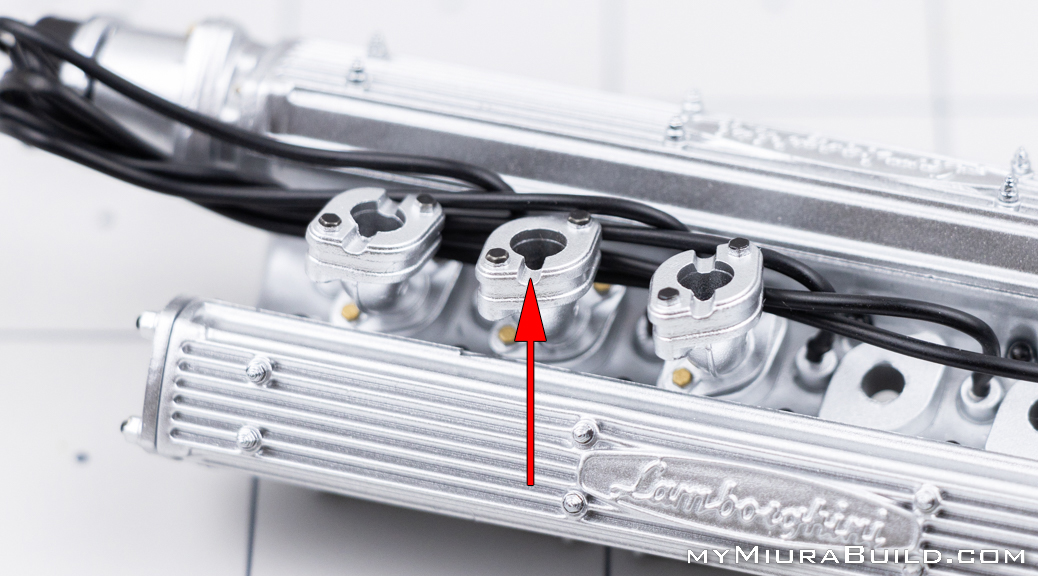 Again, take care not to press down on the Velocity Stacks – the mesh is very delicate: 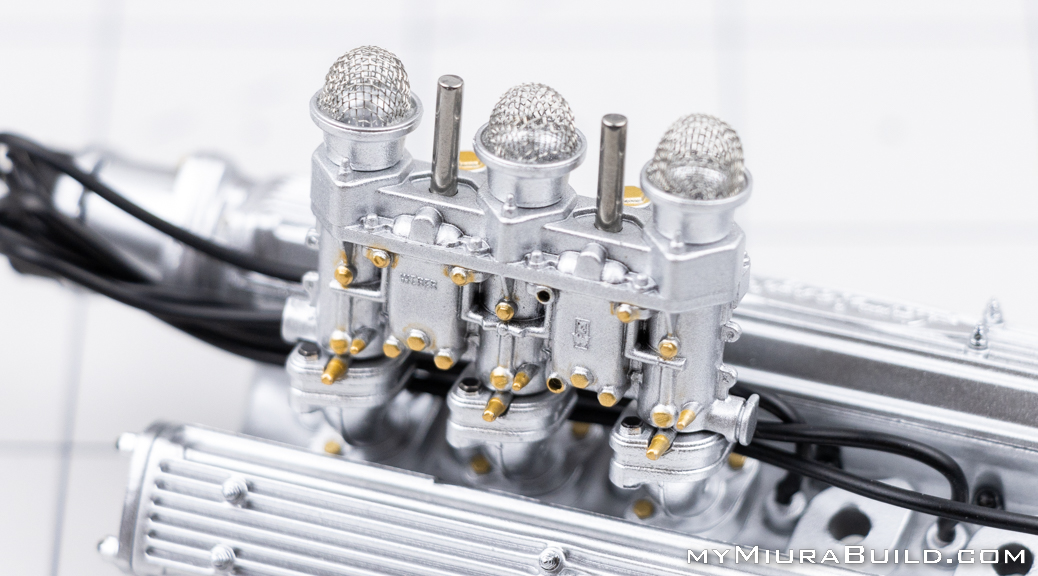 Repeat the previous step to install the second Left Carburettor: 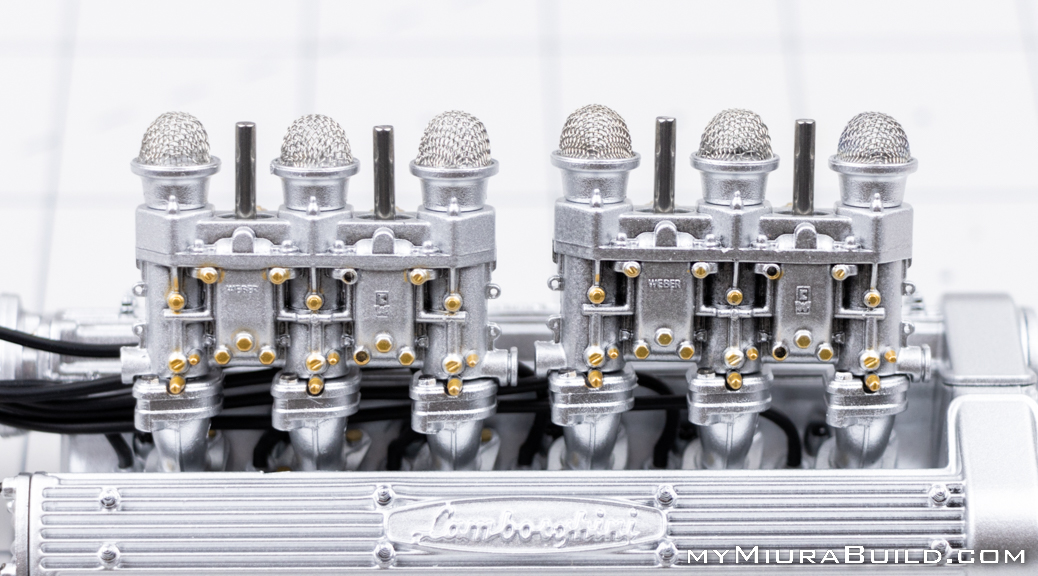 As before, press the four pins of the second Petrol Pipe Fitting into the matching holes of both Left Carburettors making sure the Petrol Pipe pin (arrow below) is facing the end opposite the Distributor, as shown: 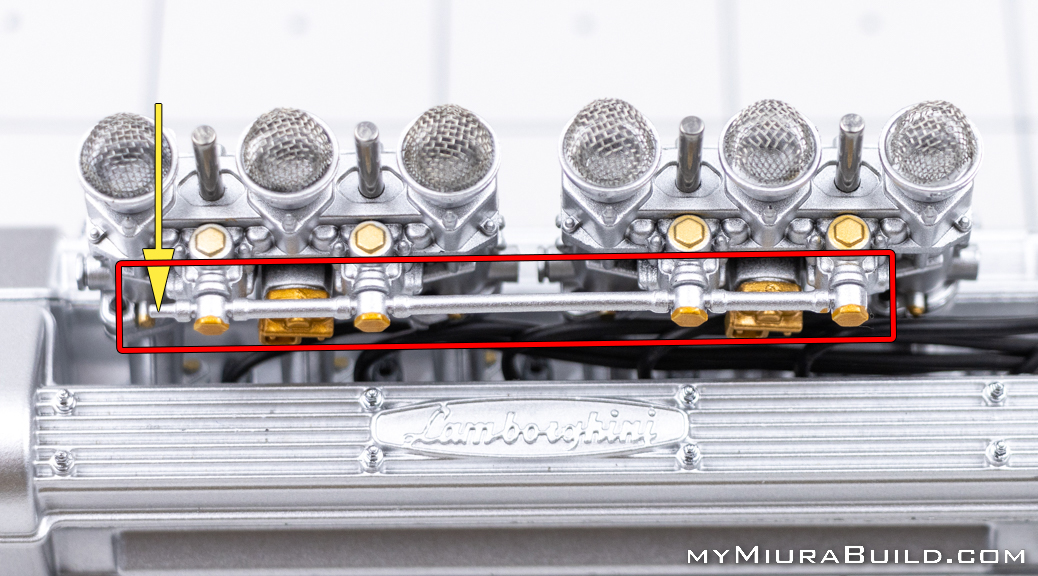 Carefully slide the remaining longer Petrol Pipe onto the pin at the end of this Petrol Pipe Fitting, as shown: 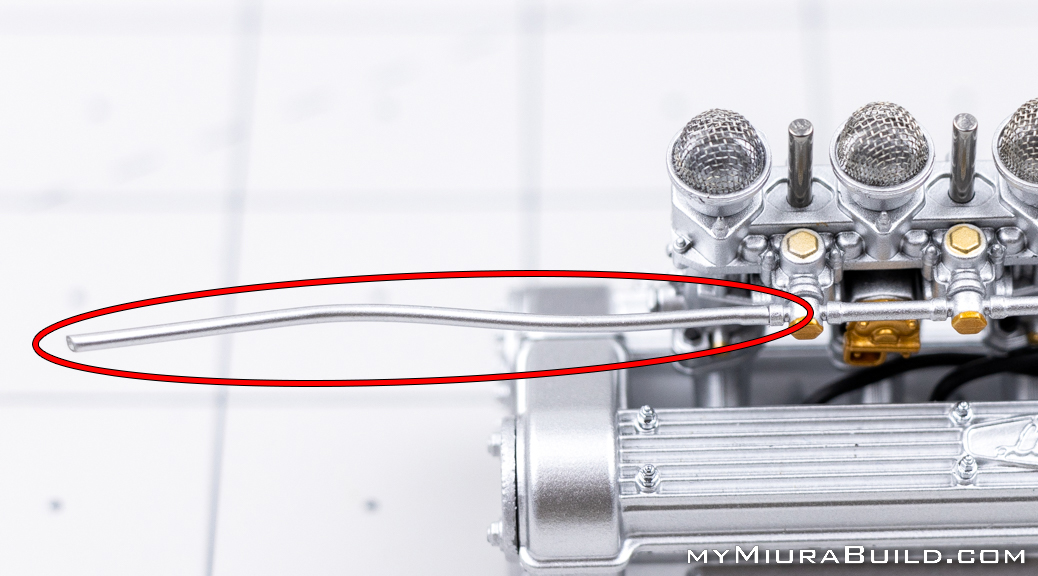 Both Cylinder Heads of our Lamborghini Miura V12 engine are now complete and ready to be installed to the Engine Base (block). This is coming up in the next stage. Yet, even without the base attached, both of these assemblies have some serious weight to them. Feels great!